Gollday had to leave Tuesday's practice early after tweaking his hamstring. He is still undergoing testing, but it appears that Golladay should be fine by the start of the season. The 27-year-old wideout signed a four-year, $72 million deal with the Giants in March. He was limited to just five games last season due to injury, but averaged a career-high 10.6 yards per target.

There was no official designation for the star wide receiver's injury, but it appeared to be a leg injury in the hamstring area. We'll see what the word is regarding his status, but it wasn't a good sign - Golladay played in just 5 games last season due to injuries. For now, expect Sterling Shepard to jump into the de-facto WR1 role at camp, and Kadarius Toney and John Ross could be in line for added work. 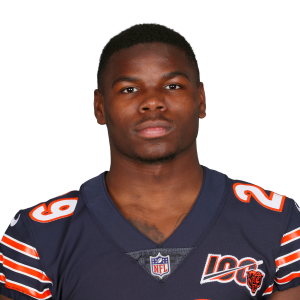 Chicago Bears running back Tarik Cohen is not particularly close to being activated off the Physically Unable to Perform to list.

That's what head coach Matt Nagy told reporters, using the phrase "weeks away" to describe the running back's status. Cohen is coming off an ACL tear suffered in Week 3 of the 2020 season. His availability for the start of the regular season isn't guaranteed, so his status should be one to monitor over the next couple weeks. Damien Williams and Khalil Herbert should be in line for more work until Cohen returns. New York Jets running back Michael Carter is standing out at training camp thus far, according to Connor Hughes of The Athletic.

Carter was just drafted out of North Carolina, but it seems as though he's already making an impression. "Carter is a step above the other three running backs (Tevin Coleman, Ty Johnson, Lamical Perine)," Hughes wrote. It's still early, but Carter also seems to be getting the first-team reps at running back alongside rookie quarterback Zach Wilson. It's definitely something to monitor as camp progresses.

Stafford exited Monday's practice early after hitting his throwing thumb on a player's helmet. The veteran quarterback underwent a minor operation on the same thumb earlier this offseason, but he's expected to return to action well before the Rams' Sunday night opener against the Chicago Bears.

Stafford is currently the QB11 in numberFire's preseason fantasy rankings. Our models expect him to average 268.6 passing yards per game with 33.76 touchdowns and 11.0 interceptions in 2021. Among the 44 quarterbacks with at least 100 drop backs last season, Stafford ranked 16th in Passing Net Expected Points per drop back. Moore has seen more hype this offseason than possibly any other wide receiver in the NFL, but the second-round pick's final collegiate season alone offers plenty of reasons for optimism; he tallied over twice as many receiving yards as the next-best Ole Miss receiver in 2020, and averaged a truly ridiculous 149.1 yards per game in that stretch. If the draft-day hype from former teammate A.J. Brown wasn't enough to convince you of his talent, the constant praise from reporters in New York should be more than sufficient.

Moore has an opportunity to climb the ladder in an unproven Jets depth chart this season, mostly competing with free-agent-acquisition Corey Davis for targets. He is currently projected to finish the season with 64 receptions, 780.5 yards, and 4.5 touchdowns off of 99.3 targets.