Should PPR Scoring Change the Way You Value Positions in Fantasy Football?

Rank the following players for me: Jarvis Landry, Brandon Marshall and Vincent Jackson.

Throughout the NFL season you'll likely be asked this type of question countless times. And what's the first thing that comes to mind when you see a question like the one above?

Okay, and after you think to yourself "Why do I have to rank these players? Isn't that your job?" what's the second thing that comes to mind?

There's a good chance you were wondering whether this was for a standard- or PPR-scoring league.

Intuitively, we all know that player values change when you move from a standard-scoring format to a PPR-scoring one. Players who haul in more receptions should be moved up. Those who receive less volume in the passing game should be moved down.

But when you take a deeper look at the situation, a few questions emerge: Which players actually see their values significantly change between these two scoring formats? And by how much?

I sought to answer these questions and more in the following study. 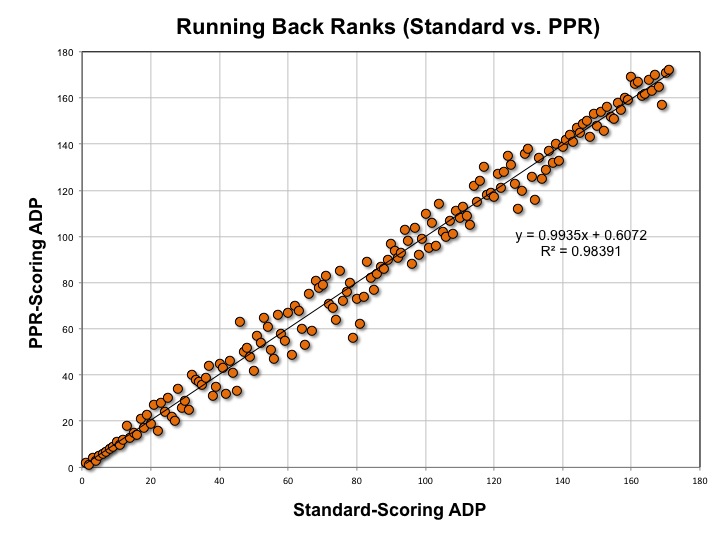 The first things you probably notice from this graph is that the slope of our trendline is nearly 1.0 (which would be the slope of the line if all players maintained nearly the same value in PPR versus standard scoring formats), and how closely each player's value clusters near that trendline (meaning their ranks don't change drastically between these two scoring formats).

On the whole, we see that player values actually don't fluctuate much between these two scoring formats, and this is especially true for running backs who end the year as an RB1.

This is more easily observed when we plot player ranks in standard-scoring leagues against the difference between their standard scoring and PPR scoring ranks. 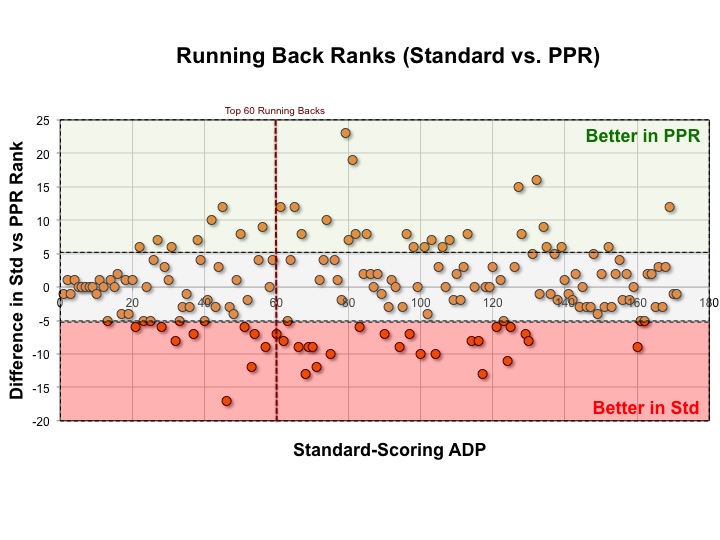 We see that none of the top 12 running backs deviate more than one spot between their standard and PPR-scoring format ranks. This includes pass catching extraordinaire Matt Forte, whose fourth place finish in standard leagues jumps all the way up to third place in PPR leagues.

When we search for athletes ranked in the top 60 in standard-scoring formats who have a PPR rank greater than six spots above their standard-scoring one (which is equivlaent to half a tier in 12-team scoring leagues), only a handful of names appear.

Not surprisingly, the backs on this list are those considered third down backs, and therefore rack up a lot of their scoring in the passing game.

In terms of those making significant jumps in value, Pierre Thomas jumps from RB4 status in standard leagues to a RB3/flex play in PPR, Shane Vereen squeezes his way into low-end RB2 value, and Fred Jackson also makes a comparable leap.

On the flip side, when we look for athletes who ranked in the top 60 in standard-scoring formats whose PPR rank was greater than six spots below their standard-scoring rank, again, just a few names appear.

Again, as one might expect, these backs are the ones who rarely catch the ball out of the backfield and whose scoring rely heavily on touchdowns. This includes notable standard-scoring studs such as Andre Williams, whose 7 touchdowns but paltry 18 receptions dropped him from RB2 to RB3 status in PPR formats, and Isaiah Crowell, whose 8 touchdowns against just 9 receptions had him fall outside the top 30 in PPR leagues.

When we apply the same study above to the wide receivers, we see very similar trends to this group that we saw in the running backs. 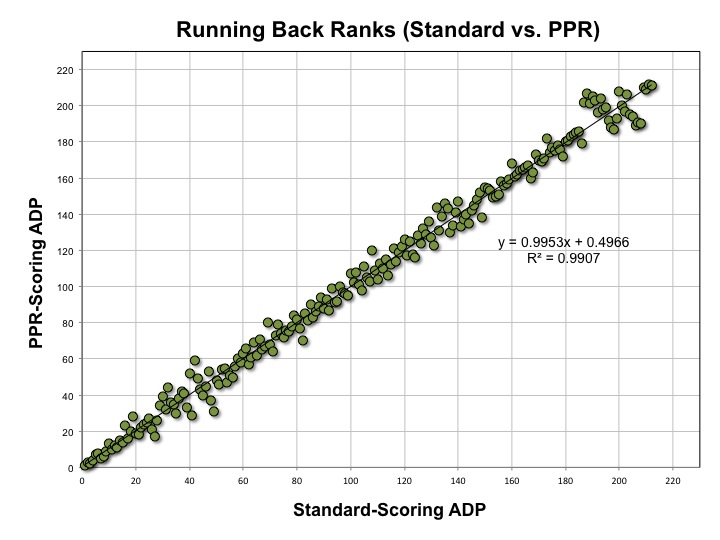 Again, not much variance occurs in players ranked in the top-12 of the position. Only one player -- the touchdown-heavy Mike Evans -- finished the year with a larger than two spot difference between his standard and PPR-scoring ranks.

This is again better visualized when we plot a player's standard-scoring rank against the difference in their PPR-scoring rank. 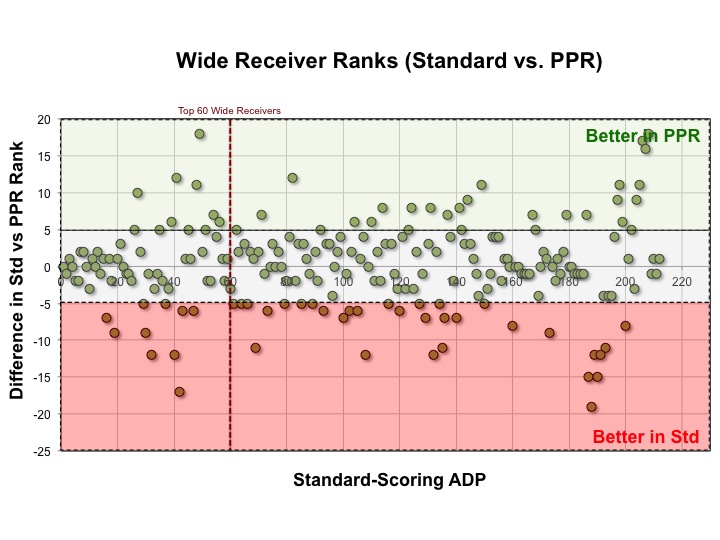 When we search once more for players ranked in the top 60 in standard scoring formats whose rank in PPR leagues was greater than six spots above their standard-scoring rank, the list is almost unanimously comprised of slot receivers.

These receivers -- including Julian Edelman and Pierre Garcon -- find a nice trade-off to their low average depth of target (and in turn relatively low reception yard totals) with a consistently high target and catch rate given the dump-off nature of the routes they run.

This is perhaps best demonstrated by Dolphins' wideout  Jarvis Landry, whose value jumps up a full tier-and-a-half in PPR leagues above his standard-scoring rank thanks in large part to the high volume of passes thrown his way by Ryan Tannehill.

What about the receivers whose values drop in PPR-scoring formats versus standard-scoring leagues?

These players tend to be the ones typically characterized as deep threats such as John Brown and Torrey Smith -- where the majority of their yards come on a few big catches -- as well as touchdown-scoring mavens such as Martavis Bryant -- whose value receives a boost in standard scoring leagues where touchdowns make up a larger percentage of a player's final point total.

Let's conclude our study by taking a look at the tight end position. 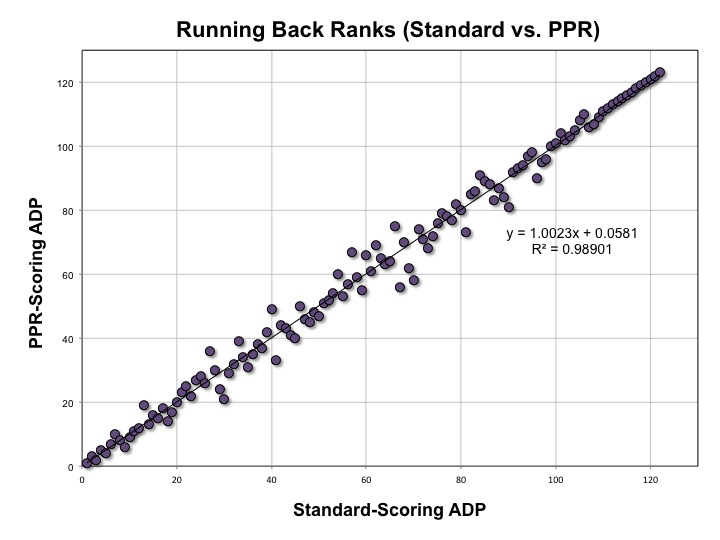 Looking at the ranks of these players in standard- versus PPR-scoring leagues, we see that of all the positions, tight ends show the lowest variation between these two scoring formats, with many players clustering right at or near the trendline.

And again, when we plot the standard-scoring rank of each tight end against their variation in rank between the two scoring formats, we see a tendency for tight ends to end the year in almost the exact same position regardless of format. 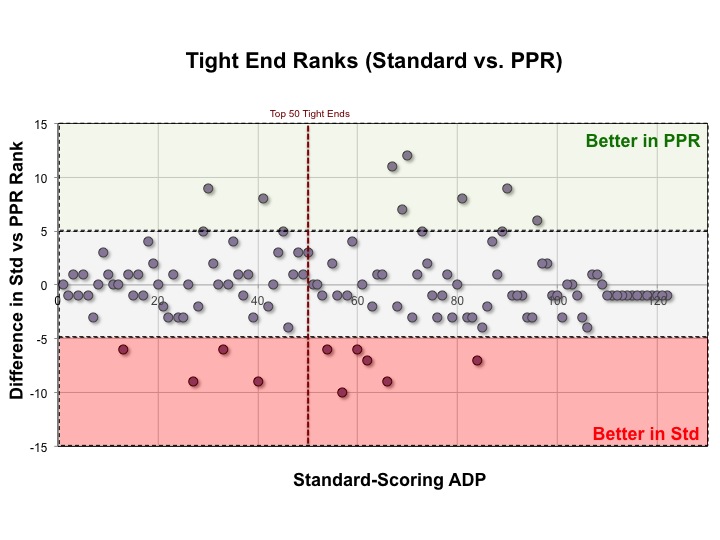 Indeed, only six players ranked in the top 50 saw a greater than six position change in rank in either direction, which of course is a larger jump in rank relative to the other two positions considering the difference in supply at tight end.

With the most notable change in value being Jordan Reed and his jump into low-end TE2 territory, one could argue that no one of note saw a big enough positive change in value between PPR- and standard-scoring formats to rise into fantasy relevance.

On the opposite end of the spectrum, while a very small group as well, we see that those performing worse in PPR-leagues were once again those heavily dependent on touchdowns for their scoring.

Again, the one truly relevant name in this group would be "Robocop"  Dwayne Allen, whose 8 touchdowns but measly 30 receiving yards per game average dropped him from borderline TE1 status in standard leagues to low-end TE2 status in PPR.

What Does This All Mean for Fantasy Football?

The take home message from all this data is that you shouldn't adjust your rankings too drastically between standard and PPR-scoring leagues. This is especially true for players ranked in the top-tier of their position. Indeed, only one player ranked in the top 12 of any position in 2014 had a variance of greater than two spots between their PPR- and standard-scoring league rank.

And even beyond this tier, only a few players will show a greater than 6-spot (or half-tier) change in rank in either direction between the two formats.

Among running backs, these are typically your third down backs who rise from RB3 status to RB2 status in PPR formats. And for wide receivers, these are your slot receivers who see a profitable trade off in receiving yards with greater volume in the passing game.

Finally, going in the other direction, players who rank far better in standard-scoring leagues versus PPR-scoring leagues are those whose usage typically revolves around the red zone and therefore whose point totals comprise mostly of touchdown scores.

Do Running Back Rush Attempts Translate From College to the NFL?