5 NFL Stats to Know Through Week 2

All the months of preparation for the 2021 NFL Draft come to a head on April 29th.

We’ve known about some of the picks for weeks or months -- quarterbacks Trevor Lawrence and Zach Wilson are universally expected to go first and second, respectively -- but there is still plenty of discussion and intrigue to be had from the third pick on.

Smokescreens and test balloons are now being floated through NFL media every minute, but soon, the first round will show us exactly who deserves the premium prospect spots.

In the unforgettable words of Marvel’s Sorcerer Supreme, Dr. Stephen Strange, “We’re in the endgame now.”

That doesn’t mean your attention to the betting markets should ebb just yet, though. There are some very compelling (and sometimes volatile) lines out there for positional totals in Round 1. These are markets that we can use the prowess of expert mockers, the wisdom of the crowds, and historical precedent to analyze thoroughly and find you value on.

In 2021, we’re dealing with precedents hitherto undreamt of, but we can help you crack them and find value in offensive skill position totals for Round 1 of the NFL Draft.

Total Running Backs Drafted in Round 1

This is an intriguing market whose odds have shifted a bit in the last day or so. Essentially, a 0.5 line is asking you: “Will a running back be drafted in the first round or not?” For we believers in the process of analytics, we might see this as an easy under play, but neither the wisdom of the crowd nor the experts agree with us.

Even draft history is skeptical of the under. In the last 11 draft classes, only two haven’t seen a running back selected in the first round. Those were 2013 and 2014, whose highest-picked backs were Giovani Bernard (37th overall) and Bishop Sankey (57th overall), respectively. These look like weak draft classes and aberrations, rather than the norm.

Although Alabama's Najee Harris has been long thought to be the perfect target for the Pittsburgh Steelers at 24th overall, plenty of expert picks actually send him to the New York Jets at 23.

That leaves the Steelers the potential of taking Travis Etienne out of Clemson one pick later. In addition, the Expected Draft Positions (EDP’s) of Harris and Etienne on Grinding the Mocks come out to 25 and 32: both first-round values. 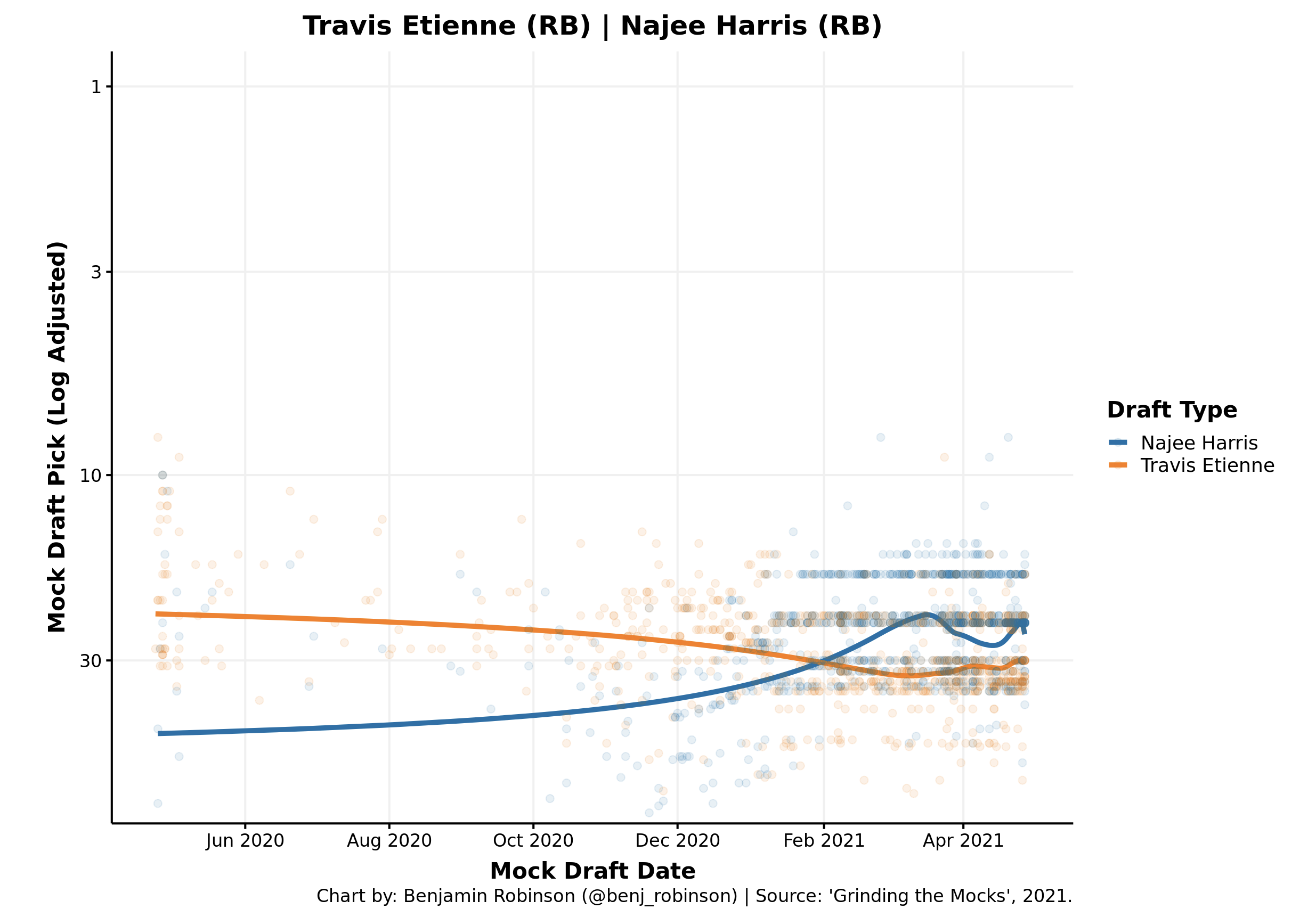 This doesn’t even include the potential for either to be selected by another running back-needy team like the Miami Dolphins (at 18th overall), Jacksonville Jaguars (at 25th overall), or the Buffalo Bills (at 30th overall).

Five potential landing spots and two players head and shoulders above their peers at their position is a recipe for an over 0.5 bet if I’ve ever heard it.

Total Wide Receivers Drafted in Round 1

Depending on who you ask, there are three top-tier talents right off the bat -- Louisiana State's Ja'Marr Chase and Alabama's DeVonta Smith and Jaylen Waddle -- who are expected to be taken in the top 12-15 selections of the 2021 NFL Draft.

Beyond that, things are a little more up for debate.

In today’s NFL -- which lives and dies with the passing game -- we shouldn’t be surprised to see six first-round receivers in last year’s draft class.

History also tells us that the first round has averaged 4.0 receivers since 2014, and just three of the last seven draft classes have gone over this line.

In Grinding the Mocks’ crowd consensus, only four receivers have first-round EDP’s: the three receivers mentioned above plus Florida's Kadarius Toney.

Minnesota's Rashod Bateman and LSU’s Terrace Marshall Jr. come in at 34 and 36, respectively, so they aren’t far off. That said, the expert mock consensus also only includes four first-round receivers, with Marshall going to the Baltimore Ravens at 27th overall. 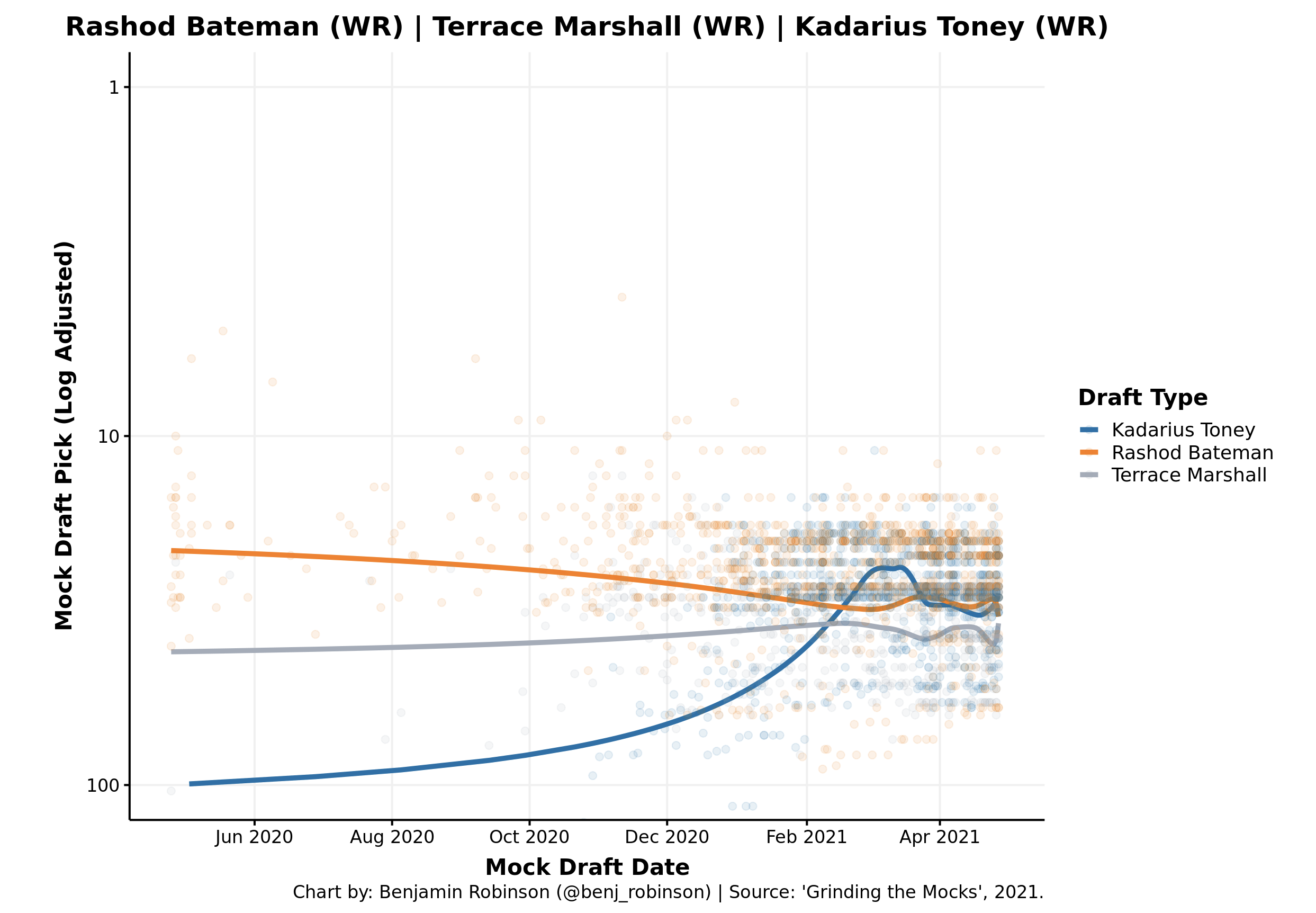 This line is close and could go either way, but I think wide receiver has flat enough tiers outside of the big three that I would lean under 4.5, especially with the plus odds at +250.

Five quarterbacks on the first day means some position has to suffer, so I assume Day 2 will be chock-full of pass-catchers.

Total Tight Ends Drafted in Round 1

There is one tight end and one tight end only that everyone is talking about, and that’s Florida offensive weapon Kyle Pitts. Pitts is a top-10 lock and might end up the first top-five tight end since Denver Broncos 1972 pick Riley Odoms.

With one surefire first-rounder, then, this line is set at a more interesting 1.5.

The question becomes, therefore, will another tight end sneak into the first round? The best candidates, per Grinding the Mocks, are Pat Freiermuth of Penn State, Brevin Jordan of Miami (FL), and Tre' McKitty of Georgia. 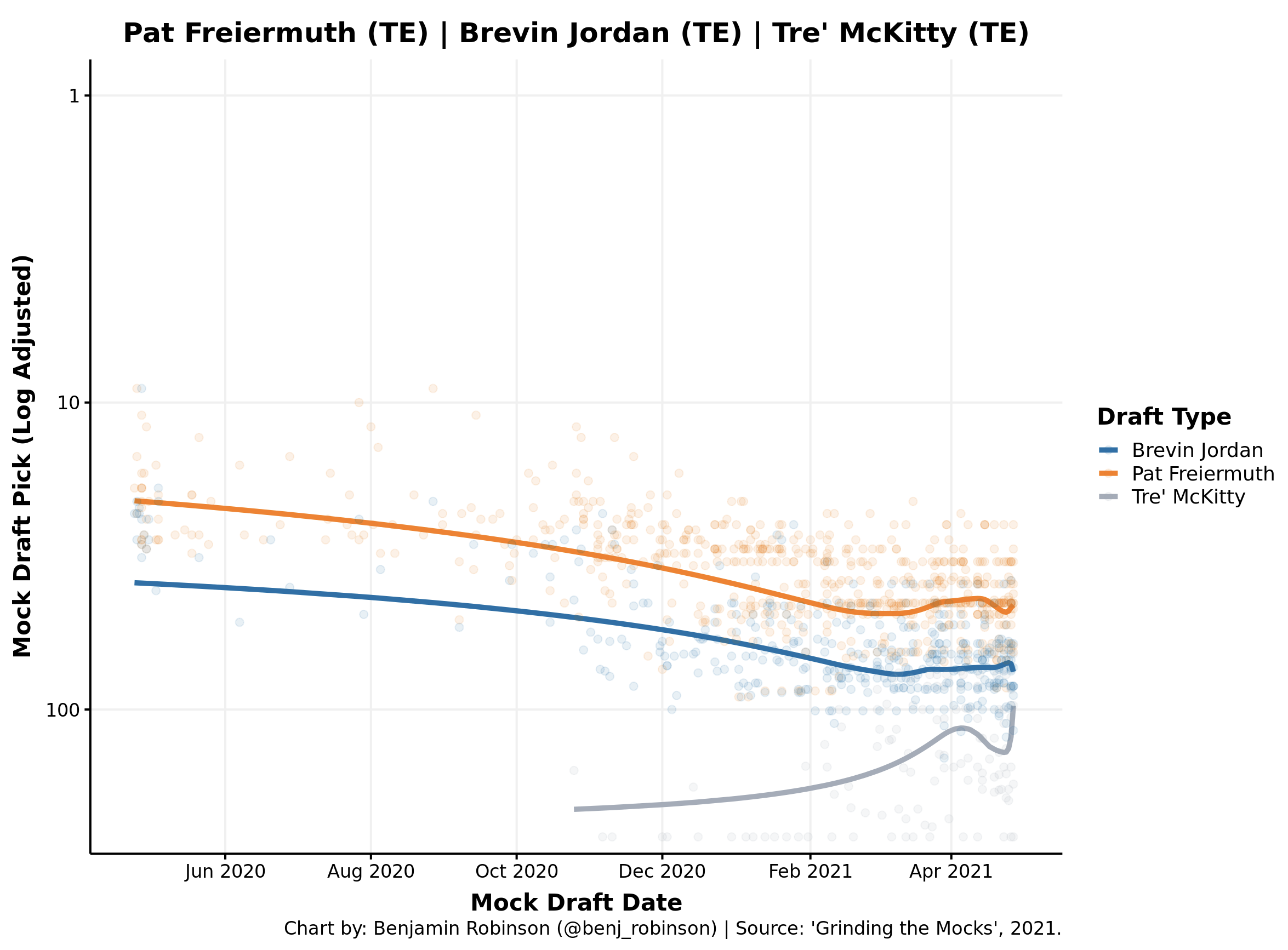 Freiermuth was considered a potential first-rounder prior to a mid-November slip in the mocks but has settled into the mid-second round in the crowd consensus.

Jordan, too, was near the first, but is looking more like a third-round or later type of selection at this point. Despite McKitty’s late surge in the mocks, he doesn’t appear likely to breach the Day 2 ranks, let alone Day 1.

Tight end has been an odd position historically, but the average first-round class since 2010 has been 0.8, with an average of 1.2 over the last five years. Among the last 11 classes, only two hit the over on this line (though both were in the last five years).

This one seems pretty cut and dry. Kyle Pitts is a lock and everyone else is a mile and a half behind. The under isn’t sexy, with an 81.9% implied probability, but it’s the best bet.