​Fantasy Football: How Might the Lions’ Passing Offense Operate With Jared Goff?

As a young man, I had dreams of becoming an actor. I went to a performing arts high school, and I decided that I would go to college, get a theatre degree, and make a career on the stage. I found out that Minneapolis was top-two in the U.S. in per-capita number of theatres, so I moved there and thought I was set. This was where I wanted to be; I had made it.

I was rarely given professional opportunities as an actor, and when I got into teaching theatre, I found the structured environment wasn’t a good fit. I had to bounce around before I found where I truly belonged and got a rude awakening when the first stop on my journey came to a screeching halt.

New Detroit Lions quarterback Jared Goff has to be feeling a bit of whiplash himself. The guy goes from being the first overall pick in the 2016 NFL Draft, to getting to a Super Bowl and receiving a mega-extension, to his team needing to send an extra draft pick just to get rid of his bloated contract. Not only that, but the dude from the bright lights and warm breeze of Cali now gets shipped off the hard and chilly milieu of the Motor City in Michigan.

It’ll be a culture shock for Goff, to be sure, but the Cal product’s arrival also heralds a very different look for his new team. How will the Lions’ passing offense perform with Goff under center?

What Went Wrong for Goff

These are the results of the issues, but what was the cause?

Many people point to a diminished number of deep attempts in 2019 and 2020 as a reason Goff and the Rams took a nosedive. This certainly seems feasible, as the depth of target distribution chart below indicates.

Goff’s percentage of attempts that went 10 yards or fewer beyond the line of scrimmage jumped from the average 55.5% per season in his peak seasons to 61.1% the last two years. His rate of deep attempts fell over the same timeframe, from 11.7% in his peak to 8.4%.

Worse, Goff’s deep passing accuracy completely cratered over the last two years, as well. The table below shows his accuracy rate by depth over his career in terms of adjusted completion rate (completions plus drops, divided by catchable passes).

Goff nearly touched a 50% deep adjusted completion rate in 2018, which was among the top quarter of qualifying NFL passers that year. This last year, however, that mark dropped to just under 35%, which ranked in the bottom 20th percentile of the league.

With both the volume and effectiveness of his deep targets diminished, the offense around Goff became extremely conservative. How did that affect the fantasy output for his pass catchers?

I plotted out the fantasy positional finishes and PPR total season points for the Rams’ WR1, WR2, WR3, TE1, and TE2 over Goff’s career so that we could see the trajectory of his offenses. For 2016, when Goff started just seven games, I prorated his pass-catchers’ fantasy points to a full 16 games from that sample.

How well has Goff supported his pass-catchers for fantasy? 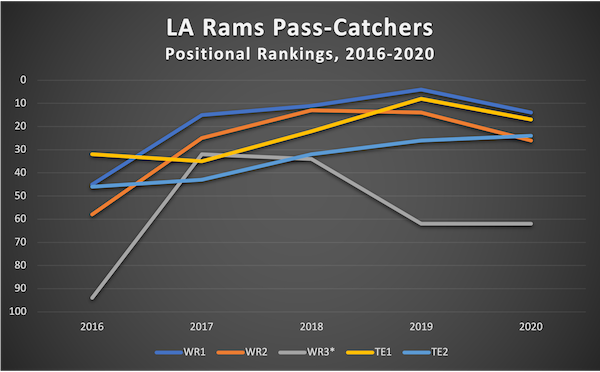 Although the underlying metrics in the previous section made Goff’s 2020 look unnervingly similar to his disastrous 2016 rookie season, from this perspective, the output of his fantasy weapons didn't suffer. The floor of his pass-catchers got significantly higher over time, with even his TE2 in 2016 going from just 46th among tight ends to 24th at the position in 2020.

Part of the downturn of the Rams’ WR3 also seems to coincide with Brandin Cooks' Week 8 concussion in 2019. Prior to this injury, Cooks was a top-40 fantasy receiver; post-injury, he was outside the top 80. Without Cooks' reliable presence as a deep threat for half the 2019 season (then getting traded in 2020), the Rams’ deep game withered.

What seems to be the issue with Goff’s offense since 2019 is that its points distribution has gone back to the 2016 composition. You can see that in the graph below. 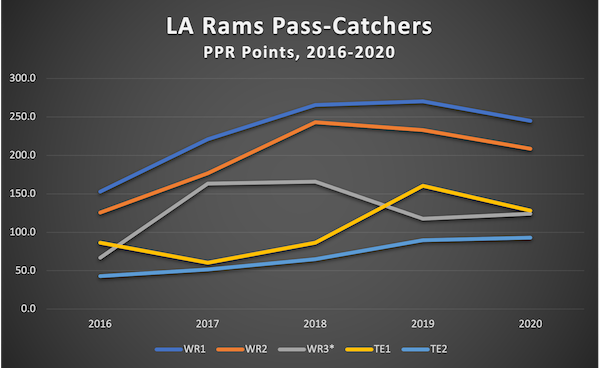 The 2017 and 2018 campaigns saw three wide receivers score at least 150 PPR points for the Rams, but 2019 saw a drop for the WR3, which has stabilized in the 120-point range. As a result of this -- and of passing shorter more and more accurately -- his TE1 has averaged more than 140 fantasy points over the last two years. Obviously, wide receiver scoring is more valuable to us as fantasy players, with tight end as a “onesie” position. That also means we’ll notice more that Goff no longer can support a third fantasy-relevant receiver, even if his tight end is now a much better option.

When controlling for passing attempts, in fact, Goff’s last two years weren’t significantly worse than his peak years, as the table below shows.

The major difference for Goff between his “drop off” and his halcyon seasons was who the ball was going to. Outside of that, he still seems to be able to keep a few weapons fantasy relevant.

Move on Down to Motown

So, what does all this mean for the Lions’ pass-catchers and their fantasy chances in 2021?

As of now, Breshad Perriman and Tyrell Williams sit atop the wide receiver depth chart in Detroit. Neither obviously matches the talent of the duo Goff is leaving back in LA, so expecting both to finish as top-25 wide receivers with 200-plus PPR points apiece might be a stretch.

Perriman was likely brought in to revive the deep threat element of Goff’s game, as he has been top five in average depth of target each of the last two years. Still, Perriman was just 89th last season among more than 100 qualifying receivers in adjusted catch rate (total receptions divided by catchable passes) and holds just an 81.5% mark in the category over the last two years. This doesn’t bode well for a match with Goff, whose deep accuracy has diminished of late.

I’d expect Williams to be much more heavily utilized as a catch-and-run player in the mold of Cooper Kupp, however. Williams was in the top third of qualifying receivers in yards after catch per reception over each of his last two active seasons (2018 and 2019) and was in the top five each of the two years before that. He should be Goff’s top target at wideout as things stand. Tight end T.J. Hockenson also fits nicely into the spot Tyler Higbee filled in LA.

It might make sense to pencil in Josh Hill or Hunter Bryant as the Gerald Everett-type at TE2, but I actually think their presence is an opportunity for more looks to go to running back D'Andre Swift. In 2020, Rams running backs had a combined 12.3% target share, while Swift alone had a 12.1% share when on the field last season. Without nearly as talented a second tight end as Everett as well as an underwhelming receiver depth chart (and head coach Dan Campbell stating he wants Swift used all over the formation), Swift could easily match or surpass the portion of looks he had in his rookie season.

The X-factor here comes with what the Lions will do with the seventh overall pick in the NFL Draft. If LSU standout Ja'Marr Chase is there and Detroit selects him, that probably bumps one of the veteran wideouts down the pecking order. Otherwise, Chase’s possession receiver skillset – reminiscent of Robert Woods – might herald a return to the three-receiver build that Goff had around him a few years back.

No matter how April shakes out, Goff won’t be the problem with this offense. He’s no gunslinger like Matthew Stafford, but -- with the right array of support -- he can spread around the fantasy points and keep them flowing.