Lamar Jackson Is the Best Quarterback in College Football

Coming into the 2016-17 college football season, if you were to ask the question "Who is the best quarterback in the nation?" the answers you get would surely vary.

Of these eight signal-callers, five entered the new campaign among Bovada's top 10 in their preseason Heisman odds. As a matter of fact, Watson and Barrett were among the top five favorites to win the coveted hardware.

Only a few weeks later, just half of the eight stud quarterbacks boast unblemished records. Rosen, Rudolph, Mayfield, and Kelly have all lost a game apiece while Falk's Cougars have started out 0-2 against lesser competition. Wins aren't a quarterback stat and all, but losing games sure doesn't help your Heisman chances, and it doesn't boost your ranking among the nation's top quarterbacks -- no matter how it happens.

At that, if your performance in wins isn't reflective of the talent you possess -- as is the case for Watson and Barrett both -- that doesn't do anything to cement your place as the best quarterback in NCAA football. As for Ward, he has a big win under his belt but sat out Week 2 with injury. We'll have to wait and see if these three can bounce back to improve their cases for both best quarterback and Heisman favorite.

In the midst of all this is Louisville's Lamar Jackson, who you probably didn't hear a lot about prior to this season's kickoff.

Jackson has seen his Heisman odds go from from 50/1 before the season to 18/1 after Week 1 and 6/1 now -- behind only four other hopefuls. There's no more ignoring the argument that Jackson could be the nation's top quarterback.

Through two weeks, Jackson ranks first in total touchdowns, with 13, and is tied for sixth in passing touchdowns and is second (behind Kalen Ballage) in rushing touchdowns nationally. 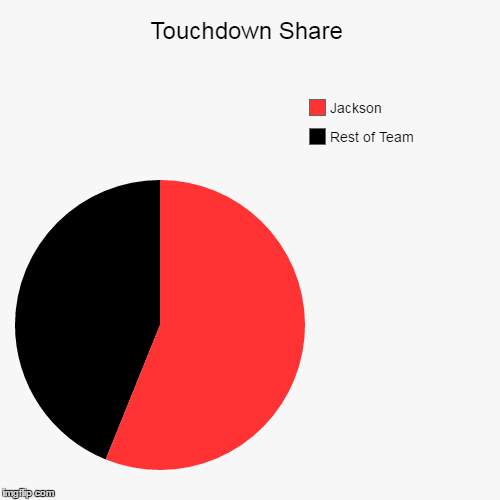 And when this freak of an athlete isn't compiling scores, he's racking up yards in bunches. Jackson is third and eighth among all rushers and passers, respectively, in terms of total yards. In addition to accounting for over 59% of his team's points per game, in one way or another, the Cardinals' point man has amassed 507.5 total yards of Louisville's 754 per game.

The quarterback is basically two-thirds, if not more, of the Louisville offense. What is most impressive, though, is his ability to maintain outstanding efficiency while taking on such a gigantic workload.

I completely understand that it was against UNC-Charlotte and Syracuse, but Jackson has shown flashes of an improved passing game. Through two games, he's tallied a total of 697 yards on a completion percentage of nearly 60%, and his 11.2 yards per attempt and 12.8 adjusted yards per attempt are an even better indicator of his early season success.

In addition to stretching defenses with downfield passes, with seven touchdowns and a single interception to his name, the sophomore has been the definition of efficiency in Bobby Petrino's offense, based on Expected Points Added (EPA), an ESPN metric that shows what each player has contributed to his team via the pass and rush and what that same player has negatively contributed (or avoided) in terms of sacks and penalties.

Of all qualified NCAA quarterbacks, Jackson isn't the greatest when it comes to the pass (34th), but he is all alone atop the board as it pertains to run EPA (1st). In fact, he is only one of two players (along with TCU's Kenny Hill) above 10 and doubles up all but one other (Taysom Hill from Brigham Young) quarterback in the metric.

Overall, his 24.6 total expected points added is third in the nation behind Hill and Texas Tech's Patrick Mahomes II, who play in more passing efficiency-friendly offenses.

In comparison to DeShaun Watson, Jackson has been leaps and bounds better thus far. His numbers come in 99 plays while Watson's total expected points of 2.7 comes in 15 more plays. The same can be said for total QBR, in which Jackson ranks second in college football, with a rating of 95.6 -- nearly double the Clemson quarterback's mark of 48.5.

If these comparisons aren't doing it for you, how about this: Jackson's run EPA of 10.5 in Week 2 places him in a tie for the 29th-best score since these metrics started to tracked in 2004. And if he was able to keep up the pace he is currently on, over the course of the season, he would total 95.4 EPA via his legs -- a total that would smash the current top mark of 67.9 set by Johnny Manziel in 2012.

Any player can look down the barrel of regression, but what Jackson has in front of him is a fully loaded tank looking to bring him back down to Earth immediately. That tank comes in the form of the Florida State Seminoles this coming Saturday, when the Cardinals play host to their conference foe.

Florida State certainly brings a lot more talent to the table than Louisville's two previous opponents -- and that's exactly what Vegas' thinking appears to be as well. The Seminoles are two-point road favorites, but our numbers suggest that they aren't all that great defensively, which could be a problem against the dynamic Jackson.

While Florida State's rush defense is solid, giving up a mere 3.4 adjusted yards per rush, their pass defense rating of 7.12 adjusted yards allowed per pass suggests that they are more than vulnerable through the air. The last time the 'Noles surrendered at least 7 adjusted yards per pass was the 2009-10 season, and now isn't a good time to have a collapse. Jackson and the Cardinals come in averaging 12.16 adjusted yards gained per pass, so their speed-vertical attack will be poised to take advantage of mistakes in the secondary.

Even if Louisville finds a way to defeat Florida State, among seven other weaker teams, they will still face two powerhouse teams in Clemson and Houston down the road.

Our numbers suggest that whether it's second-ranked Florida State, fifth-ranked Clemson, or sixth-ranked Houston, it doesn't matter. The Cardinals, despite a lower ranking (10th) in the pools, are the superior team according to the metrics.

With a nERD (our calculation of how good a team really is, based on expected point differential against a league average team) of 30.0, they are our fifth-ranked team in the nation. The 'Noles, Tigers, and Cougars rank 60th, 28th, and 23rd, respectively.

In removing the error of popular opinion and program legacy, the numbers suggest two things: that Lamar Jackson is the best quarterback in the nation, and that the Louisville Cardinals are way better than we think.

A talent like Jackson is more than special enough to take Louisville to new heights and leapfrog those who stand in his team's way. I mean...

The 2016 Heisman Trophy Candidates By the Numbers