One of the unique challenges with daily fantasy NASCAR is that every track is different. Not only does this mean that certain drivers will perform better at one place than another, but each track will have different scoring tendencies than the previous one. That means we need to alter our strategies pretty drastically.

Each week here on numberFire, we're going to dig into the track that's hosting the upcoming weekend's race to see what all we need to know when we're setting our lineups. We'll have a separate piece that looks at drivers who have excelled there in the past; here, we just want to know about the track itself. Once qualifying has been completed, we'll also have a primer detailing which drivers fit this strategy and should be in your lineup for that week.

This week, the Monster Energy NASCAR Cup Series finishes the second round of the playoffs with the Hollywood Casino 400 in Kansas. What do we need to know about the track before filling out our NASCAR DFS lineups? Let's check it out.

Kansas is a track the Cup Series has been to already this year, and it's a track type with which we are hyper familiar. That means things should be pretty cut and dry from a strategy perspective for the track itself.

We'll circle back to that in a second, but first, we have to address the playoffs. It's another cutoff race, which means things could get a little weird on Sunday with the drivers on the bubble. And with how wacky things got in Talladega on Monday, there are a lot of nervous drivers entering the weekend.

Kyle Larson and Ryan Blaney have wins this round, meaning they've already advanced to the Round of 8, and they can do whatever they want this weekend.

The next six drivers are all currently in position to advance. However, if one of the drivers currently outside the top eight were to win, then there'd be some diciness for the bubble. Here's the rest of the playoff field and where they sit relative to the cutline.

As such, we should assume every driver on that list is going to emphasize maximizing stage points on Sunday. This matters less in Kansas than it would in a place like the Charlotte roval because you can't pit without losing a lap, but it could certainly impact strategy.

This shouldn't really alter the way we view any of the drivers currently in line to advance. They need good races, which means gunning for a good finish, and that's exactly what we want. So there won't be any major alterations there.

The one place you could potentially tweak your views of the drivers is on the bottom four. They don't necessarily need to win to advance, but it would be the best shot they'd all have without any of the other drivers running into early issues. This could lead to a more high-variance approach on their part, hoping to strategize their way into a win. That would increase the risk around these drivers a hair.

But in actuality, all of those drivers are competent, and both Chase Elliott and Alex Bowman had a shot to win the first Kansas race this year without having to get too weird. So for the most part, we can likely proceed as usual and largely ignore the cutline implications of this race. It's worth considering, but we don't need to go too crazy in emphasizing it this week as we did at the roval three races ago. Instead, we can play it pretty straight, and we've got a solid formula for doing so on this track type.

This Sunday's Kansas race will be the ninth at a 1.5-mile track this year -- seven of which have used the full new rules package -- and the second one in Kansas. This means we've got a good amount of data on how races at these tracks will play out in the new rules package, meaning we should know how to play things in DFS.

That's a luxury in itself because nobody wants a guessing game. But it's also a luxury because the data we have says we can target drivers anywhere in the pack.

The chart below shows the FanDuel point scoring distribution based on where drivers have started in the first seven races using this package at a 1.5-mile track. All races have been normalized to scoring as if they were a 267-lap race, which will be the length of Sunday's race in Kansas. 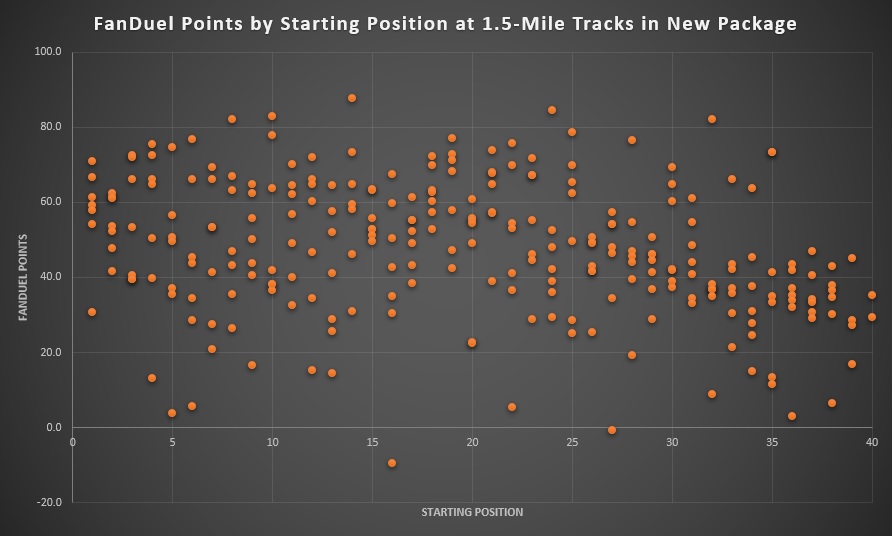 The highest FanDuel totals have come from basically everywhere on the grid. Here are the starting ranges of the top 10 scores, again adjusted to fit a 267-lap race.

You can generate a ceiling from anywhere in the field as long as your car is fast enough. That's not something we can say heading into every race.

You'll notice that a lot of the big-time performances came from drivers starting between 6th and 10th. That shouldn't be taken as a signal to load up on drivers in that range. That just happens to be where drivers who have led a good number of laps have started.

In this seven-race sample, 13 drivers have led at least 60 adjusted laps. Six of them did start in the top five, so starting up front was still a big edge for drivers, but six started 10th or lower, and two came from outside the top 20.

This data combined with the chart tells us two things. First, leading laps still matters, even though passing is increased. There are 26.7 points available for laps led, and we would love to get access to that upside if possible. So gunning for laps led is still recommended.

But the second point is that you don't need to start at the front in order to lead said laps. In the playoff race at Las Vegas, Joey Logano led the most laps after starting 22nd. Martin Truex Jr. won the race after starting 24th. You can target drivers who have poor qualifying runs without limiting the upside you get via laps led.

Because of this, we should have a slight preference for drivers starting a little bit further back. We're not capping our laps-led upside, and they can pick up some place-differential points along the way. We need to make sure they're fast enough to work their way to the front, but if they are, their floor and upside will be pretty desirable.

Again, drivers starting near the front have upside, too, so this isn't to say you should ignore them. By all means, go there if you think they're the fastest cars on the track. But those starting a bit deeper do have a slight upside advantage.

We'll circle back to how you can identify who has this coveted speed in a second, but first, let's run through the value plays. The thought process there is pretty similar for the studs.

NASCAR switched back to single-car qualifying in May. Since then, we've had five races at 1.5-mile tracks, and 24 drivers have finished among the top-10 cars in FanDuel points across those individual races with a salary of $10,000 or lower. Here's a list of those drivers, sorted in ascending order from where they started the race.

It's pretty similar to what we saw with the studs where drivers could get a solid output from pretty much anywhere. But some definite trends do emerge.

Of the 24 drivers to notch top-10 single-race scores with a salary at $10,000 or lower, seven started between 21st and 25th. If we relax that range a bit more, 10 drivers started between 17th and 25th, which is a fairly large number. All of those drivers finished 12th or better, and only one finished outside the top 10, so you still needed to notch a good finish. But this range was pretty fruitful.

Drivers were able to score well after starting outside of that range, so you don't need to whittle things down too much. If a value driver can crank out a top-10 finish, it doesn't matter too much where they're starting. But if they can do that and they're starting in the middle of the pack, we should feel pretty comfortable targeting them.

Now that that's settled, it's probably important to discuss how you identify the drivers who can make noise during the race. Most of that analysis should center around current form.

In the previous seven races at 1.5-mile tracks in this package, current form has been the segment of my model that has correlated the best to each driver's average running position six times. The lone exception -- coincidentally -- was the first race in Kansas, where practice times held a slight edge. But current form has beaten out track history at all seven races, and practice has done so five times. So, current form should be our biggest emphasis followed by practice and then a dash of track history.

For the current form segment, last month's Las Vegas race will be a key indicator of who could carry speed on Sunday. Vegas and Kansas are both 1.5-mile tracks with moderate banking, and the Vegas race was recent enough to show which teams have made gains during the season. It was also the first race in the playoffs, meaning each team brought their best horses. We can certainly look at how drivers have performed broadly at 1.5-mile tracks (Racing Reference's Fantasy Tool can show each driver's results in this specified sample), but Vegas is the one we should lean on most heavily.

For practice times, take a long look at each driver's lap averages. NASCAR.com's Race Center will show 5-, 10-, and 15-lap averages for each driver who hits each mark during the two Friday sessions. If a bunch of drivers log 15-lap runs, then feel free to pull that data, but it's more likely that we'll get 10-lap averages for most of the relevant drivers. If someone puts up a good number over that time, we should expect them to race well on Sunday.

Once we combine all of this data together, we should have an idea of which cars are primed to compete. And as mentioned, we don't have to relegate ourselves to picking from just one starting range. We've got the freedom to go all over the map, and we should take advantage of that freedom. Find the fastest drivers who fit beneath the salary cap, plug them into your lineups, and then see how things unfold throughout the afternoon.

Daily Fantasy NASCAR: Why Each Track Is Unique