8 Players to Avoid in Fantasy Football Drafts This Year

Let Someone Else Draft Julian Edelman in Fantasy Football This Year

Matt Kupferle  —  @MKupferle Aug 24th, 2019
Share on Facebook Share on Twitter
Willie Calhoun should see plenty of playing time down the stretch for a fading Texas team. Which other adds can give your season-long squad a boost?

It's waiver time. There's only a few short weeks left in the fantasy season, and now is not the time to take your foot off the gas pedal. One of the keys to any fantasy success is not only nailing your draft, but scouring that waiver wire for players who can give your team a boost. Even though fantasy baseball can be a really long season, it's key to search those waivers and take it week-by-week to cement your fantasy status.

The four players below are all owned in fewer than 50% of Yahoo leagues and could give your team a lift.

Despite smashing 10 home runs in his last 93 at-bats, Kyle Seager remains criminally under-owned in fantasy leagues, likely due to his recent injury history and overall subpar performance in recent years.

But at this rate, we shouldn't be ignoring him from a fantasy perspective. While Seager has been primarily a pull hitter from his spray chart below over, per Baseball Savant, it's been a highly effective approach as he has surged his way to a .345 wOBA in 2019. 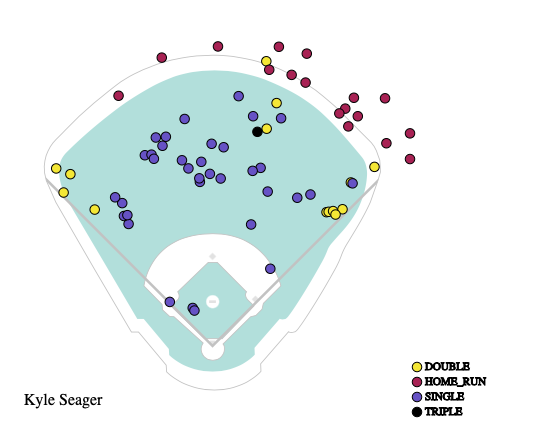 Obviously, the homers are unlikely to sustain at this rate, but with a 41.3% hard-hit rate and 9.5% walk rate showcasing a solid batting profile, Seager is worth a long look.

The San Francisco Giants are in the thick of the playoff hunt, and Logan Webb has been inserted into the starting rotation. If you are unfamiliar with the pitching prospect, you need to get familiar.

Logan Webb has brought the to his #MLB debut.

Check out the first 7⃣ strikeouts of his first start for the @SFGiants. pic.twitter.com/aOFnpKnLTm
— MLB Pipeline (@MLBPipeline) August 18, 2019

Webb isn't an overpowering arm, as he has averaged 88.4 MPH on his fastball, but his excellent command and pitch mix makes him a challenging matchup. This season, he posted a 24.3% strikeout rate or better in every stop in the minors, and his walk rate has been under 10% in each location, as well.

If you need some help in your fantasy rotation, consider Webb.

With Danny Santana nursing a sore hamstring (although he did return to action last night) and as the Texas Rangers continue to fade, it would make sense to give Willie Calhoun an extended look. If he keeps hammering the ball, they won't have a choice.

Like Seager, Calhoun is a pull-heavy hitter, and all but one of his homers have been to right or right-center. But that seems to not have much of a negative impact on the lefty slugger, as he has posted only a 19.0% strikeout rate this season with 14 home runs and .895 OPS.

Nine of Calhoun's 14 long balls have come in the last month, with him recording a monster .985 OPS in that span. If you need some additional pop, Calhoun is your guy.

When you get this late in the fantasy season, managing your roster, especially in rotisserie leagues, is absolutely critical. A guy like Jon Berti of the Miami Marlins could be a key piece down the stretch run if you need some speed.

Berti has been manning the leadoff spot often lately, and he's been pretty darn tasty. In his last 30 days, he has a surprising .905 OPS, 18 runs, five steals and three home runs. While the home runs are nice, they are an added bonus and not something we should expect much of -- Berti's high at any one stop in the minors is eight.

But the speed is legit. He has a 40-steal and 56-steal season to his name already in the minors, so it's obvious the guy can flat out run. Speed can be somewhat of a tricky category to navigate, so if you need a player -- one who is available in nearly all leagues -- who can get some swipes, Berti is perfect.